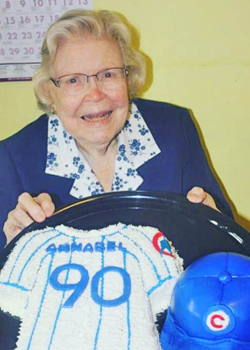 Annabel Christensen, 96, of Martin, S.D., passed away at her home on February 2, 2021. She was the only child born to Homer Clyde Wood and Effie Lee Parris Wood at their log cabin home near Boulder, Colo., on December 6, 1924.

Annabel was wed to John Edward Christensen of Martin on June 7, 1958, in Boulder. Four daughters were born to this marriage; Mary, Janet, Liz, and Kaye. John and Annabel spent their married life on their ranch home near Tuthill, S.D., until they retired and moved to Martin. Their daughter Janet passed away in 1968, and John passed away in September of 2005.

Annabel worked as a legal secretary prior to her marriage, and then was active in the family ranch operation. Throughout the years the haying crew was especially appreciative of her cooking skills. She enjoyed growing a big garden and was a skilled seamstress. Annabel was active in the Town and Country Extension Club, Our Lady of the Sacred Heart Altar Society, and was known for her exceptional quilting skills.

She was an avid philatelist her entire life, having collected stamps from an early age. Her competitive side shone through during her favorite game of Scrabble. She was also a devoted fan of the Colorado Rockies and Chicago Cubs baseball teams.

Her greatest joy was her family, both immediate and extended. She especially treasured her grandchildren, and was joyous with the news of an expected great-grandchild. She also had a love for her Boston Terriers, which were part of her family throughout her life.

Annabel was preceded in death by her parents; husband, John; and daughter, Janet.

A Rosary service was held Monday, February 8, at Our Lady of the Sacred Heart Catholic Church in Martin. Funeral services were held Tuesday, February 9, at the Church, with Fr. Tyler Dennis officiating.

Bennett County Funeral Service was in charge of arrangements. Memorials may be made to Bennett County Library through Security First Bank, PO Box 669, Martin, SD 57551.