Although she is married and has a family of her own, Carly Hines will always be her daddy’s little girl. The term of endearment has special meaning for the father and daughter duo of Terry Stuckey, of Yankton, and Carly Hines, of Martin.

On her wedding day, the Sugarland hit song “Baby Girl” was played during the father-daughter special dance. Stuckey also calls his daughter…

Bennett County Sheriff Luke Hamar requested the Bennett County commissioners add in an additional deputy in their 2013 budget, citing a need to cover the county better. Hamar said he is noticing a bad trend of  alcohol related accidents.

Hamar has just two deputies and himself to cover the county and said he has his guys out on the back roads a lot, as much as they can, but… 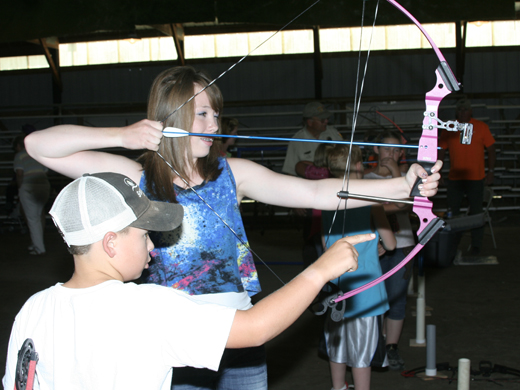 The Bennett County Fair is on target for August 8th through the 12th. According to 4-H Advisor Beth Lyon, one highlight of this year’s fair will be Thursday’s Open Range for Archery. The event is open for everyone, even if you haven’t tried archery yet. Here’s your chance to brag about that bull’s eye!
Lyon is also encouraging entrants for Open Class categories, not only in the traditional areas,…

PIERRE, S.D. – Parents of pre-teens and college freshmen should check their kids’ immunizations before the school year starts, says a state health official.
“Parents should know that babies and toddlers aren’t the only ones who need immunizations,” said Dr. Lon Kightlinger, State Epidemiologist for the Department of Health.
Kightlinger said college freshmen living in dorms and unvaccinated…

Read more: Back to school immunizations

Two people died and two others received life-threatening injuries in a one-vehicle crash on U.S. Highway 18 about two miles west of Martin on Monday, Aug. 20.
Marvin Poorbear, 44, of Springfield, S.D., was driving a 2011 Chevrolet Silverado east and traveled too far to the right of the roadway. He lost control of the vehicle, which rolled. Poorbear was wearing a seatbelt and remained in the…