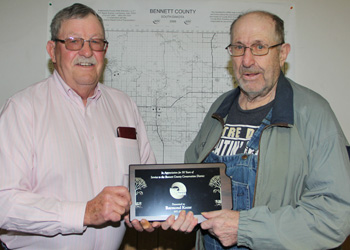 Making a 50-year commitment to serve on a specific board is a commendable accomplishment. It is especially commendable if your efforts, as are those of Raymond Kocer’s, are for the betterment of the environment and your community.

Raymond was acknowledged and awarded a plaque for 50 years of service to the Bennett County Conservation District during their regular meeting on Wednesday, March 17 at the Martin Firehall. Along with several members of the board, also in attendance at the presentation were Raymond’s two daughters, Melissa Byrne and Melanie Radant. Angela Ehlers, Executive Director of the South Dakota Association of Conservation Districts was also present.

Raymond became an elected official on the board in 1971 and has continuously served to the present date. Over the years, he has held the positions of chairman, vice-chairman and treasurer. He is an outstanding board member and serves the people of Bennett County with his experience regarding stewardship of the land.