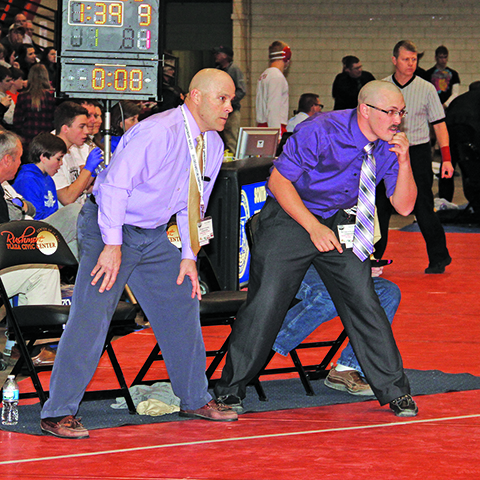 His wrestling journey began when he was a youngster, competing in AAU wrestling. He would go on to have an outstanding high school career, racking up 145 wins, making the state finals three times and finishing fourth once. He expressed disappointment in finishing second three times and not bringing home a state title, but just getting to the championship match once is quite an accomplishment and he did it three times.

Brent went on to wrestle a little in college at Brigham Young University (BYU) and said that experience was a big help in his coaching career. At BYU, he earned a Mechanical Engineering degree.

He coached 14 years at Bennett County, volunteering under longtime coach Mike Olson, then taking over as head coach in 2009 after Olson retired as wrestling coach. He was the head coach from the 2009-2010 season to 2013-2014. He switched with Jon Pierson at that point so he could spend more time following his daughter, Rachel, while she played basketball.

When Pierson became Junior High principal and athletic director, he assumed the head coaching position again for the 2019-2020 season.

Current BCHS Athletic Director and former head wrestling coach Jon Pierson started coaching under Brent, saying, “He has had an enormous impact on Bennett County athletics and the entire wrestling program. During his involvement, Bennett County wrestling saw 73 state qualifiers, 28 state placers, multiple Region team placings, and Brent was once voted Region Coach of the Year. Bennett County’s dual record while Brent was involved with the program was 53-20 which is an amazing 72.6 Win Percentage. Personally, the amount that I learned from Brent as an aspiring coach was immense. His experience and his ability to work with athletes and coaches from all levels really elevated my ability to coach and the way I approach life in general. He will be missed.”

“When we moved back to Martin in 2002, I jumped into the AAU program,” said Ireland. “At the time, Kelvin McCollam and Scott Larson were the coaches. After two seasons as the high school head coach, I stepped back as an active AAU coach. I spent 10 years as the club president as well.”

Brent was awarded for his outstanding coaching, receiving the Region 4B Wrestling Coach of the Year Award for the 2012-2013 season.

“The thing I enjoyed most was seeing the kids learn and improve,” said Ireland. “At some point, a light just comes on and they start to believe in themselves and off they go! Not that they become unbeatable, but they do gain a certain confidence that allows them to compete at a much higher level. It affects their effort, focus, etc. That is a life skill that I really enjoyed watching develop.”

“I got into coaching because of my kids, however, without question, I was a better coach for kids that weren’t my own,” replied Ireland when asked if it was hard coaching his own kids. “With your own kids, it’s quite difficult to separate coach and dad! I loved the time that I was able to spend with my kids and I wouldn’t trade that for anything, but I do sometimes wonder if they wouldn’t have been better served from a coaching standpoint if I would have just been dad and someone else had been their coach. I guess we’ll never know!”

Brent had three sons wrestle that he coached, all with successful wrestling careers, all placing at the state tournament.

When asked who he would like to point out that played a key role in his wrestling career he responded, “I should probably start with my parents who have always been very supportive of my endeavors. My dad didn’t wrestle himself but was a High school wrestling coach and is the one who got me started on that path. Obviously Mike Olson! He coached me during my high school days and then the first year I helped with the program was his last year.  Over the years I coached with Scott Larson, Jon Pierson and Clint Neville. They all contributed to my coaching.  They each possessed attributes and skills that I recognized as something I should adopt/change in the way I was coaching.”

Brent was asked how his family has handled heading out every weekend during the season and how they helped out.

“Without question, my coaching days added to my wife Tauna’s workload,” he replied. “At least during AAU, we could travel together. But when I started with the high school program, she then had to drive to most events on her own, many times with our younger kids in tow! She has always been very supportive and probably, more than anyone, kept me focused on what was really most important…the kids!”

“I think it is probably time for someone else to put their mark on the program,” said Ireland about his future plans.  “It’s something I’ll always have an interest in. As far as other plans, it was always in our plans to have more free time during the winter months to be able to travel and visit our grown kids where ever they may be.”

Brent said he still will lend a hand now and again if needed but not on a full time basis.

He said the kids are in good hands with Clint Neville, new head wrestling coach who helped out last year.

“The overall future of wrestling at Bennett County looks pretty good,” said Ireland. “There is a good group of young wrestlers coming back and the AAU wrestling program has a lot of good wrestlers that will eventually come up.”

“I’ll miss working with the kids and seeing them have success,” said Ireland. “Success is different for every kid.”

Brent summed up what wrestling has meant to him by adding, “I really enjoyed wrestling as it has been a part of my life since I was very little. As time went on, I developed more and more of an appreciation for wrestling. It is a unique sport that teaches us some important lessons in life.”