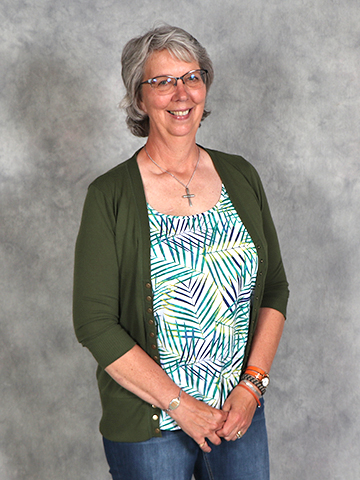 Carol Risse’s 35-year teaching career will come to a bitter-sweet end as of the first of June. Carol spent the last 20 years teaching third and fourth grades at Bennett County School District. Prior to that, she spent 15 years at Oglala Lakota County where she taught primary and middle school children.

“When I was around 16 or 17, and a bit confused about which career path I wanted to pursue, my mom said to me, ‘I think you should be a teacher,’” Carol stated.

While going to college in Chicago, Carol took a job in the retail industry to help fund her college education. “I really liked working in retail and thought that was my goal in life. Suddenly it became more and more apparent that I would have to live in a big city to pursue this line of work and that didn’t seem feasible for me,” Carol said.

Carol was born in Michigan. Her parents were missionaries so a life of travel was inevitable. “Many of the places people want to go see, I have already been to,” Carol said.

Her family spent a lot of years traveling throughout various countries in Europe. While serving as missionaries in Nigeria, they met a missionary family from Custer. “We met again at a reunion and they invited us to Custer,” Carol said.

Through her sister she learned that more teaching jobs were becoming increasingly available, with a big need at the reservations, so she took a substitute teaching job in Allen before landing her job in Martin. Shortly after her subbing job in Allen, she got her teaching certificate.

Relocating to Martin, she met her husband Wes, and as they say, “The rest is history.”

Carol and her family have lived outside of Tuthill for 25 years where they have farmed and ranched and raised 5 boys.

When Carol wasn’t in the classroom, you could undoubtedly find her at a sporting event. “I love all sporting events, but my favorite would have to be baseball. With five boys actively involved in sports, it kept me on the go,” she said.

Carol’s boys are all out of school now but she has 13 grandchildren so the probability of her ceasing to attend athletic events probably isn’t likely.

“I spent a lot of extra time outside the classroom helping students who were struggling,” Carol said. BCSD offers Intervention Programs, so those, along with the additional one-on-one time, enabled her to justify her efforts.

“Every child can learn. I have to say that my most rewarding experience would have to be seeing children who are struggling suddenly having their ah-ha moment,” Carol said.

One of the funniest events Carol remembers from her teaching tenure happened in a first grade classroom. The children were encouraged to sing, so one day when they were asked what they wanted to sing, someone replied, “The BB song.” Carol had no idea what song they were referring to but finally was told, The Star Spangled Banner which we all know is always sung at basketball games.

Carol gets somewhat disappointed when the government tries to dictate educational policies when they don’t have a clue as to what all is involved. Covid-19 brought on its own level of crazy but Carol is hopeful that by August things will return to normal.

“The four-day school week is wonderful and I love it. Living in a rural area, it gives families more time to work on farming and ranching activities with their children. It’s a win-win situation,” she said.

“I would recommend a teaching career for others but I wish I could bring back some things from the good old days. Incoming teachers won’t know the difference; however. Keanna Ward will be taking my place in the fall. She was my student teacher. I think it’s great,” Carol stated.

Retirement will enable Carol to work on some unfinished projects such as scrapbooks and photo albums. She especially wants to get scrapbooks done for her grandchildren along with spending more time gardening and reading. A trip to Alaska is also on the bucket list for Carol and Wes.

Congratulations Carol on your retirement and thank you for your commitment to education.